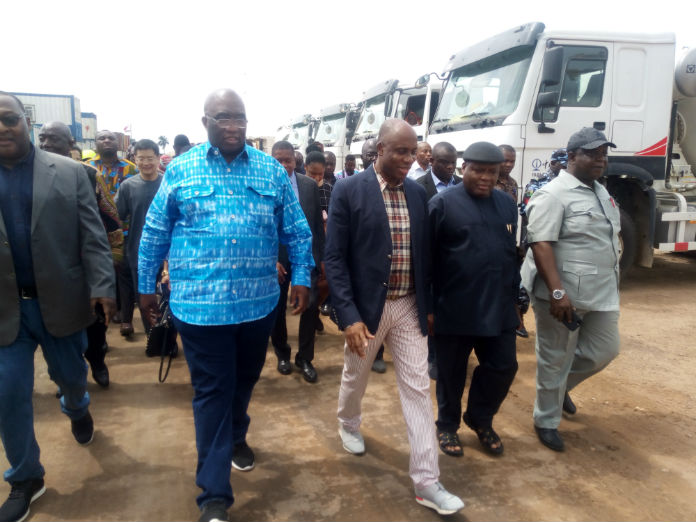 The Federal Government of Nigeria has said that the Lagos-Ibadan standard gauge rail project which began  more than one year ago, will be completed by last week of May, 2019.

Nigeria’s Minister of Transport, Rt. Hon. Rotimi Amaechi re echoed the statement on Friday March 29, 2019 during the regular inspection of the Lagos- Ibadan  rail project, with Ghana Minister of Railway Development, Joe Ghartey, the National Assembly Commitee on land transport led by Senator Gbenga Ashafa, the Executive Secretary of the Nigerian Shippers Council, Barrister Hassan Bello and the media.

The inspection started from the ongoing construction site at Ebute Metta Ultra Modern Station in Lagos passed through  Kajola, Ifo, Papalanto, Itori, Abeokuta in Ogun State and terminated at Ibadan in Oyo State.

Rt. Hon. Amaechi said that the contractor was working effectively to deal with some challenges before the Rainy season. He noted that water level at various river points have posed a challenge to the project.

He said that the track laying will be completed before May this year and President Muhammadu Buhari might have a train ride from Lagos to Ibadan. 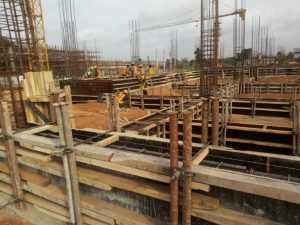 The Ghanaian minister for Railway Development, Hon Geo Gharthey commended the level of the work done and applauded  Rt. Hon. Amaechi for carrying out routine monitoring and inspection of the project.

In a chat with the News Dot Africa correspondent, Hon Geo Ghartey said, “This is about one year, you will agree with me that it is not usual that you have a project of this magnitude being ahead of schedule, how has he done  it?

“The Transportation Minister has exhibited high level dignity in service, integrity, hard work and commitment to his country. As I told your colleagues, he would have sent someone to bring reports but he is coming here following and pushing, I think it is very impressive and worth emulating”.

Hon. Ghartey noted that upon completion, the standard gauge project would ease the the transportation means in Nigeria and boost the economy in a manner the citizens could not even imagine.

When asked what lesson he would take to Ghana, Hon Geo Garthey said, “The dexterity, the zeal, the energy and earnestly, I admire the passion of Honourable Amaechi has shown to succeed in the Nigerian rail project and I will take all these to push my team to deliver further on the railway development in my country.

Meanwhile, the Executive Secretary of the Nigerian Shippers Council, Barrister Hassan Bello has said that there would be opportunities for job creation upon the completion of the project.

”The cost of transportation would from the ports to their residence reduce drastically and trucks is the only methods we have now and once the rail commences there would be competition and the laws of demand and supply would apply. Even more importantly, the security and safety of the cargo, there would be delivery of cargo in such a smooth way. 90% of the cargo comes through the roads which is only one mode.

While addressing the media at the proposed site for Ibadan Inland Dry near the Ibafan railwal terminal, The Executive Secretary/ Chief Executive, Nigerian Shippers’ Council (NSC), Hassan Bello, disclosed that shippers stand to benefit a lot from the rail transportation system.

According to Barr. Bello, “The Shippers will benefit more than anybody from the rail projects because the cost of transportation of their cargo from the sea to their warehouses will reduce drastically. Truck is the only mode of transportation we have now.

“The truckers will have competition and the law of demand and supply will apply and then the security and safety of the cargo will improve. So, there will be delivery of cargo in smooth way.

“The railway will also decongest the port because we are using only one mode of transportation which is the road and 90 per cent of the cargoes come out through the roads.”

He stressed that the project would ease transport and create jobs at various levels.

“Now if we have a cheaper mode, and we are also talking of the inland water mode, so when we have three modes . Nigeria would never be the same again with this project,” Mr Bello explained.