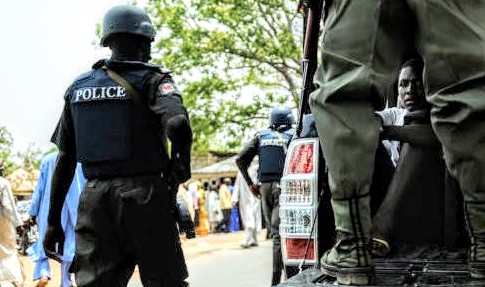 The Prominent Civil Rights advocacy Group; HUMAN RIGHTS WRITERS ASSOCIATION OF NIGERIA (HURIWA), has berated the Federal Government of Nigeria
for prolonged detention of Bala Mubarak; A Humanist alleged to have Publicly Insulted Prophet Muhammad on His Facebook page.

HURIWA noted in a detailed statement made available to NEWS DOT AFRICA that Mubarak’s prolonged detention shows that Nigeria is back to full blown dictatorship.

HURIWA explained that right is a generic term that confers certain benefits on a person who possesses it and that fundamental human right can be innate and naturally endowed by virtue of being human; which can also be derived by the operation of law.

HURIWA added that some of these rights are regarded as very fundamental to human existence and therefore should not be deprived except in circumstances provided for by the law. While some rights are also given international recognition because they are so important that they have to be addressed at the global level to appropriately secure such from being trampled upon, and for their observance and effective implementation.

“Freedom of expression is one of the fundamental rights, which are universally recognised and protected. Indeed, the Constitutions of most countries of the world, including Nigeria have expressly provided for the protection of this right because of its importance and relevance to the enhancement of personal liberty and democracy.

HURIWA also noted that though, obligations and duties are imposed on the State or its agencies and on individuals to protect and promote human rights and fundamental freedoms, however, the right to freedom of expression, like most other rights, is not absolute. There are recognised restrictions and exceptions to this right; one of which is to be found in the law of defamation. Thus, the enjoyment of the right to freedom of expression must take into consideration the right of other citizens to protect their reputation.
The onus lies on the courts therefore to balance the conflicting interests between freedom of expression and protection of reputation.

“It is against this backdrop that in our capacity as a team of professionals who have come together to advance the single agenda of building a formidable and economically strong united Nigeria based on equity, justice and rule of law do condemn the indefinite detention of Bala Mubarak and call for his release unconditionally or he be charged to court in accordance with the provisions of the Constitution. Indeed the Nigerian State is in grave violations of his constitutional right to civil liberty and freedom from arbitrary arrest and detention extralegally given that the Nigerian Constitution in section 36(5) guarantees the Right to a fair hearing for all accused persons. In his case, it would seem that the armed security forces simply abducted him and dumped him into the dungeons in clear breaches of all known statutes and legal provisions known to man universally and locally”, HURIWA added.

Narrating issues leading to the ordeal of Mubarak Bala, HURIWA said the president of the Humanist Association of Nigeria, was arrest at his home in Kaduna State on the 28th of April and taken to neighbouring Kano following a petition filed with the Police Commissioner of Kano Command on 27 April by S. S. Umar & Co. wherein Bala was alleged to have insulted the Prophet Muhammad in his Facebook posts in violation of Section 26(1)(c) of the Cyber crimes Act, which criminalises insult of any persons due to their belonging to a group distinguished by their religion, among other characteristics, and is punishable by a fine and/or up to five years’ imprisonment.

The petitioners also alleged that Bala’s posts will incite the Muslim community and lead to public disturbance under Section 210 of the Penal Code of Kano State.

“HUMAN RIGHTS WRITERS ASSOCIATION OF NIGERIA (HURIWA), is aware that Bala Mubarak who is a son of a widely regarded Islamic scholar, but he renounced Islam in 2014, and was forcibly committed to a psychiatric facility by his family in Kano for 18 days before being discharged. This action of the Kano state government is unlawful and unconstitutional given that the Right to freedom of Religion and worship is guaranteed in Chapter four of the 1999 Constitution of the Federal Republic of Nigeria just as a citizen has the inalienable right to denounce his religious beliefs as an adult.

“HURIWA is worried by the emerging media reports to the effect that since being taken to Kano, Bala’s whereabouts and his health are unknown as he has been denied contact with his family and lawyers. Given that Bala has been the victim of death threats and harassment since he renounced Islam in 2014, we are deeply concerned over his current wellbeing.

“Again, the wife who gave birth to a boy six weeks before Bala was taken has repeatedly pleaded with the Nigerian Police Headquarters in Abuja to allow her access to her husband and also show proof that her husband is still alive but all to no avail”, the statement expressed.

Humanists International and its member organizations have continued to call for the Nigerian authorities to clarify Bala’s legal status and whereabouts, grant him access to his legal representatives, and ensure his safety, and ultimately, appealing for his immediate and unconditional release. HURIWA thinks that these demands are legitimate and must be activated without any further delay. This primitive approach to law enforcement by adopting unlawful means to clamp a citizen into the dungeons because of his belief system or his lack of it, is unjustifiable and criminal.

“It is in pursuance of this freedom and equality that the constitution provides for fundamental human rights in Chapter four which is totally enforceable and binding on all persons and authority as adumbrated by the constitution in the earlier provisions that the supreme law which is the grund norm of the Country is binding on all persons and authorities. The police is not above the law. Infact and indeed they (Nigerian Police Force) are the servants of the law and must enforce the laws in total compliance to the due process of the law.

“HURIWA recalls that very important to this case of Bala Mubarak is the right to personal liberty, which is provided for by section 35 (1) of the constitution as follows:

“What this provision of the law suggests is that a person cannot be deprived of their freedom except in certain instances allowed by law. It goes to say that any deprivation of a person’s freedom without following the procedures laid down by the law is a serious violation which the law frowns at. Since the purpose of the law and the powers conferred on the police are meant to pursue freedom and equality for the people, the police cannot then turn round to violate the same freedom without recourse to the law.

“It has been held repeatedly that while the police has the power to arrest, it must respect the constitutional provision of the right to personal liberty. Where a person commits or is alleged of committing an offence, the police can arrest or detain such person within the confines of the law. Where the Nigerian Police goes beyond the ambit of its constitutional powers, the law which it seeks to enforce is offended.”

HURIWA said it is extremely alarmed over the serious lack of due process in Mr. Bala Mubarak’s case and his safety. He has reportedly not had access to a lawyer nor been allowed family visits and has been transferred and detained in Kano state, without charge, since his arrest in neighbouring Kaduna on 28 April 2020.
“It is not only illegal, but also malicious and high-handed for the Nigerian Police to refuse to release Bala Mubarak or charge him to court and to also refuse his lawyers and family access to visit. The indefinite detention of Bala Mubarak is unlawful and a flagrant violation of his constitutional rights to liberty, presumption of innocence, human dignity and due process.
“Therefore, in the best interest of justice, equity and rule of law, the Nigerian Police Force should ensure that Bala Mubarak is treated in accordance with legal rights and human rights (as enshrined in the Nigerian Constitution), and with due regard for his welfare. His rights that have already been seriously and serially violated must be redressed forthwith.  It is becoming self evident that the President Muhammadu Buhari-led administration has increasingly experienced a dangerous metamorphosis from a quasi-civilian autocracy to a full blown DICTATORSHIP as against the mandate that the people of Nigeria gave to the government in a democratic exercise of civil rights and freedom to elect their political leaders who must be subjected to the dictates and provisions of the laws without exceptions”, HURIWA demand.
HURIWA urged Nigerian citizens to “stop sleeping and wake up to demand the restoration of respect for their fundamental human rights as citizens of the Federal Republic of Nigeria” and called for immediate release of Bala Mubarak